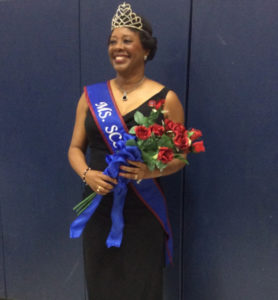 This award is given annually to an alumnus who is active in the local and the national alumni chapters and is one of the highest honors of recognition of the SCSU National Association. The awardee must have made significant contributions to the local chapter, the National Alumni Association, her profession, community, religious, civic clubs, sorority, or other organizations. Frances is an active and dedicated member of the Charlotte Chapter of South Carolina State National Alumni Association (Queen City Bulldogs).

Her coronation was held on May 11, 2019 during graduation and alumni weekend activities.

Harley is a 1973 and 1975 graduate of SCSU with a Bachelor of Arts and Master of Arts in Speech Pathology. She is a life member of the SCSU National Alumni Association, and a dedicated member of the Charlotte Chapter (Queen City Bulldogs). She has served as corresponding secretary, and co-chair of the Community Service committee.

After her thirty- nine year career as a Speech/Language Pathologist in various settings, she retired from the Charlotte/Mecklenburg School System where she received numerous awards for her leadership skills. Frances is the recipient of the MGBA’s Lifetime Achievement Award as Youth Oratorical Director for her work as a public speaking coach in the Charlotte area churches and community. She co-founded “Can We Talk” a Public Speaking Summer Program for youth.

She serves as a literacy volunteer for second grade students and has helped build two homes for homeless families with Habitat for Humanity. Frances and her husband provide book scholarships to deserving students in the Speech Pathology & Audiology Department annually. They were the first recipients of the Dr. Harold Powell Award. This award is presented to those who contribute to the success of students in the Speech Pathology & Audiology Program at South Carolina State University.

A native of Lancaster, S. C., Frances enjoys spending time with family and friends, genealogy, and Bulldog Football Games. She is a member of Reeder Memorial Baptist Church in Charlotte, N.C.

She is married to her college sweetheart, a 1976 graduate of SCSU, Gregory Harley. They have two children, April and Sam and a daughter-in-law, Jamila.